Malta competed at the 1936 Summer Olympics in Berlin.

Malta’s second participation. The fact that the Olympic Games came closer to our shores, served for the re-awakening of the Malta Olympic Committee. Mr. A. Cassar Torregiani, the MOC President, requested Mr. Giorgio and Mr. Gracey to contact the German Olympic Committee as well as the International Olympic Committee and to complain about the fact that Malta had not yet received an official invitation to take part in the Games.

The German National Olympic Committee soon answered that Malta was not on its list of members, which was given to it by the IOC. On its part, the IOC answered that Malta was no longer considered a member of the IOC, since it had failed to pay its affiliation fee.
Many local athletes were disappointed with what was happening, and it was thought that the same problems encountered in 1928 with the IOC were going to be repeated. Circulars were sent to all sports associations to elect a new MOC Committee. At a meeting held on the 8th April 1936, a new committee was formed by:

This time the MOC did not wait for any answers from the IOC, and preparations started immediately. The competitors who were to be chosen had to start training hard and regularly. A campaign to raise the sum of Lm700 was launched.

The Government donated the sum of Lm300 on condition that the fundraising committee would raise another Lm300 through its activities. Up till the 20th May, the MOC had not received any answer from the IOC, and the committee sent a telegram informing that Malta was eagerly awaiting a decision.

A positive reply was soon received from both the IOC and the German Olympic Committee who soon after sent an official invitation. Malta informed that it wished to participate with athletics and water polo.

Now the MOC could focus better on the preparation of the Maltese athletes, and in particular the water polo team. The ASA suggested to rope in Filippo Schembri, who used to play with the Sirenes – Tritons of Tunis, but who was of Maltese nationality and a British citizen, and therefore eligible to play for Malta. The idea was that Filippo would train the Maltese side and at the same time form part of the team.
Mr. Attard was sent to Tunis to convince Filippo to come and train and play for Malta. Filippo accepted, and when he arrived a week later, the Maltese players were so pleased that they started training even harder.

The Germans were determined to organize the best Games ever, and started asking many questions so as to make the athletes stay at the Olympic Village a happy one. When asked what kind of diet the Maltese athletes preferred, a lot of surprises came out.

During these Games, Malta marched behind the Union Jack.
Austin Cassar Torregiani raced in the same heat as Jesse Owens in the 100 mts. When the athletes were digging their foothold in the ground (there were no starting blocks then) Jesse Owens went to Austin, and told him “Hello buddy, we’re running in the same heat”. Austin says, that he felt like his death sentence had just been proclaimed. He managed to finish in the 4th place of that heat, but did not make it to the finals.

During these Games, the Germans revived the ceremony of the lighting of the flame at Olympia, and decided also that the winners be awarded a wreath of laurels as well as the medals.
To the disappointment of Hitler, Jesse Owens, a black American won 4 gold medals.

The 1940 and 1944 Games were not held because of World War 2
Baron Pierre de Coubertin died in 1937 and according to his will; his heart was buried in Olympia in Greece. 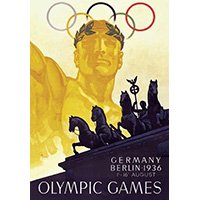 Gallery from the Olympic Summer Games – 1936 in Berlin