Malta competed at the 1948 Summer Olympics in London.

The most outstanding athletes in these Games was the Dutch woman Mrs. Francina (Fanny) Blankers–Koen, who was nicknamed as the flying Dutchwoman and the Czechoslovak Emile Zatopek.

Malta was still shattered after the war, and little did one think of the Olympic Games. Even when the official invitation was received from the British Olympic Committee, there was no interest, except from the Malta football Association, which however was facing so many problems, that they soon withdrew their interest.

It seemed then that Malta was not going to take part in these Games, and then Mr. Gracey proposed Nestor Diacono, who was doing quite well in athletics. He managed to stop the watch at 10.05 for the 100 yards, and this was considered very good. On the 9th July 1948, Mr. Nestor Jacono accompanied by Chef de Mission Mr. Manduca and Mr. F. X. Zammit Cutajar as manager left to London. Mr. Jacono was therefore the first Maltese athlete to travel by plane to the Olympic Games.

Jacono spent 15 days training under a Canadian Coach before his event, and of course he was very excited about this marvelous experience. The correspondent of the daily Telegraph described the scene at the Opening ceremony “ Amongst all the contingents, two persons (F.X. Zammit as flag bearer in front of Nestor Jacono) from the Island of the George Cross – the Maltese team which consists of only one athlete, were applauded enthusiastically and shouts of “Brave Malta’ could be heard from all around.

Nestor, was warned for a false start, and eventually did not do very well 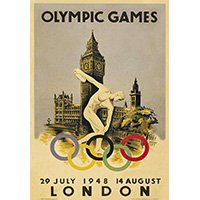 Gallery from the Olympic Summer Games – 1948 in London