Malta did not compete at the 1956 Summer Olympics in Melbourne.

Melbourne won the bid to host these Games by one vote, and many were not convinced that this was a good idea to hold them in this part of the world. 1956 remains known in history for two sad events – the Suez Canal crises, and the Revolution in Hungary. Holland refused to take part, and instead they donated the sum of L10.000 in favour of the Hungarian refugees, while Spain, Egypt and Lebanon refused to take part. IOC President, Avery Brundage warned, that the Olympic Games are held between individuals and not amongst nations, and no one should use the Games for political purposes. To complicate matters for the Organising Committee, the Australian Government, did not want to budge on the question of quarantine, and therefore, arrangements were soon made in order that the Equestrian Competitions were transferred to Stockholm.

The Australian stars in these Games were Betty Cuthbert and Shirley Strickland (de la Hunty). 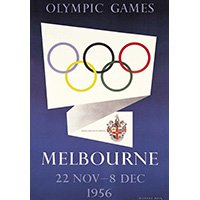 Gallery from the Olympic Summer Games – 1956 in Melbourne