Malta competed at the 1960 Summer Olympics in Rome.

The Rome Games were a success in more ways then one. Amongst the most outstanding performances, the Australian Herb Eliott’s 1500 in 3.35.6 remains one of the most interesting races ever, as well as the unexpected win of Abebe Bikila of Ethiopia who ran the marathon bare footed and setting a world record of 2.15.162

The Maltese Contingent. Malta participated in Rome with Cycling, Swimming, Shooting and Sailing (in Naples). Malta also took part in the football preliminaries, but was eliminated in Morocco. (2-2 in Malta and 1 –2 away) and 0 – 0 in Malta against Tunis, and 0 –2 away. Mr. Joe Griffiths was the coach for Malta.

The first to compete were the swimmers, and they did not do very well.

In cycling we finished last. In the individual races, Camilleri was not allowed to compete because he was suffering from a bad tooth. Bugeja stopped after 24 kilometers because of troubles with his bicycle gears. He was given another bicycle, which however was too large for him. Polidano gave up half way through the race.
In shooting we did a bit better, but no satisfactory results were achieved.

In sailing, the Maltese had to borrow their boats. The Ripard brothers competed in the Star class, while Borda and Formosa raced in the Finn Class. Here again it was clear that the Maltese were not really prepared for these Games and the results were very disappointing.
Mr. Lewis Portelli was invited to Rome to comment and broadcast live on Rediffusion about the Olympic Games. In Malta there was record sales of TV sets. 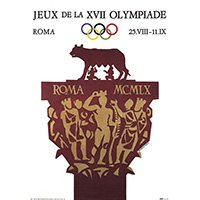 Gallery from the Olympic Summer Games – 1960 in Rome.